Important information on how COVID-19 is affecting Moink Find out more
How it Works About Us Our Story Gifts!

2 made it | 0 reviews | 0 photos
Source: https://myeverydaytable.com/how-to-use-your-moink-box/ 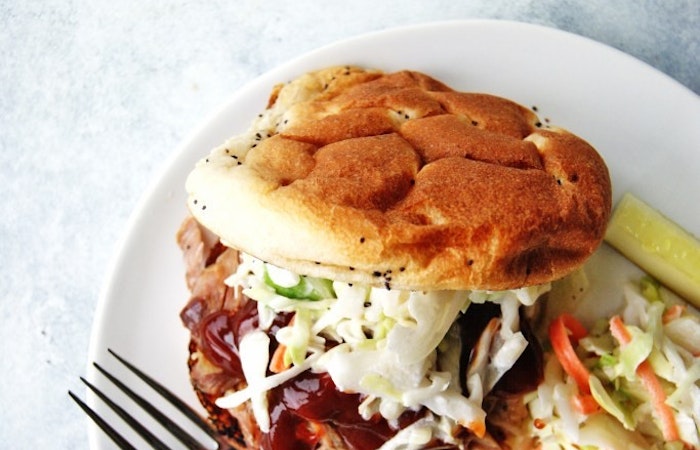 Slow Cooker Honey Pork: Cook Once, Eat Twice is an easy slow cooker pork recipe that takes just a few minutes to prep, and you can turn it into two completely different meals to maximize your time in the kitchen!

For this cook once, eat twice meal we’re going to slow cook pork in an easy sauce and then turn it into bbq pork sandwiches (served with a slaw!) and then a bbq pork + pineapple quesadilla later in the week.

We’re cooking the pork in a flavorful mixture of honey, mustard, beer, and plenty of garlic and onions. It’s delicious plain, and delicious with bbq sauce! You decide how to make your own sandwich.

Pork is a great meat for the slow cooker as it gets better and better with slow heat! This recipe calls for pork shoulder, which is also called pork butt or Boston butt. It’s the most common cut for pulled pork.

I like to share recipes that also include ideas for the side dishes, and they’re often quite easy! The bbq pork sandwiches include an easy slaw recipe – I recommend piling some on the sandwich, too! It adds great crunch and texture. The bbq pork + pineapple quesadilla is really designed to be eaten later in the week and come together really quickly so keep it simple with baby carrots, sliced cucumber, and some ranch or healthy greek yogurt veggie dip on the side.


Then we move onto the cook once, eat twice meal number two! An easy bbq pork + pineapple quesadilla. The caramelized onions take a bit of time to cook, but can easily be made ahead of time as they don’t need much hands-on time. The sweet flavors, savory cheese, and succulent pork work so well together!


No reviews yet! Will you be the first?